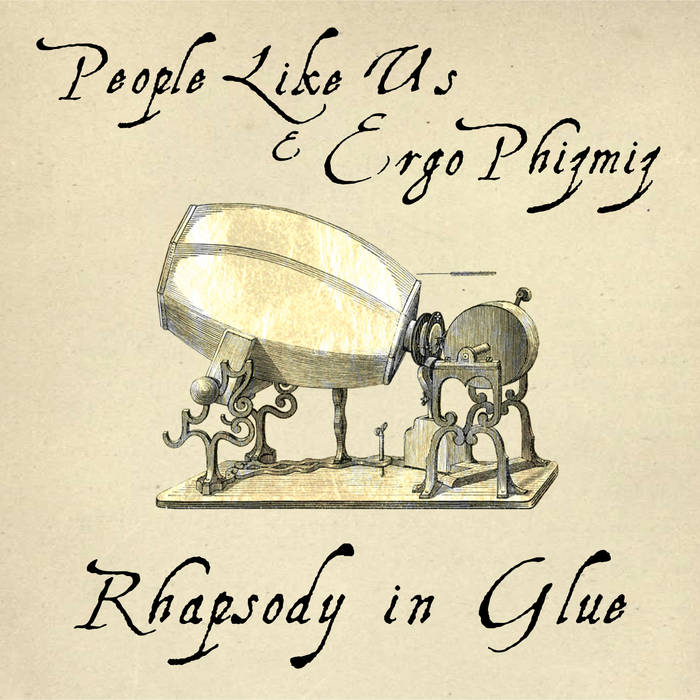 Originally released 15 May 2008 through bleep.com as an online-only album

Following the success of the critically acclaimed “Perpetuum Mobile” CD of 2007, renowned UK collagists / composers People Like Us & Ergo Phizmiz reunite for “Rhapsody in Glue”, a cycle of bricolage-ballet-music, skewed-waltzes, and skewiff-pop.
There is a story behind every album, and with “Rhapsody in Glue” we find a unique approach to constructing a record. Both long-term contributors to New York radio station WFMU, People Like Us & Ergo Phizmiz decided to publicly tear apart their respective practices and create an album “in the open”, presenting on a seafood-filled-platter the process of collaborative collage composition – informally discussing and jabbering nonsense to one another, resulting in the “Codpaste” free podcast series. “Rhapsody in Glue” is the culmination of the ideas explored in the podcast series.

“Rhapsody in Glue” continues in the bizarre ballroom vein of their previous efforts together, however, increasing the sonic palette into textural depths previously uncharted in their work. If “Carmic Waltz” is an expressionist painting by aged ballroom dance teacher who’s eaten the wrong kind of mushrooms in her soufflé, then “Gary’s Anatomy” is a slice of pure absurdist pop shot through with slabs of exotica and Ethel Merman. Recurring through the record is an apparent obsession with Prokofiev’s “Troika (Sleigh Ride)”, which merges and mashes with Burt Bacharach and Queen on “Snow Day”‘ and lapses into pure fantasy on the almost entirely acoustic “Withers in the Whist”, jarring with Ergo’s strange, Victoriana obsessed lyrics. Then on “Dancing in the Carmen” we discover what happens if Nana Mouskouri is thrown into a pot with Peggy Lee and let simmer for 10 minutes, whilst “In The Waking” shimmers along on multitracked guitars, meandering melodies, and music boxes.

Later in 2008, the duo later went on to release a 7″ with Touch entitled “Withers In The Waking“.

You can find lots of our work free on the internet. However, we do appreciate it if you purchase things from us to help us sustain this kind of work. Many thanks.

Since 1991, Vicki Bennett has been repurposing pre-existing footage to craft a/v collages, seeing sampling as folk art in the age of mechanical reproduction, with all of the sharing and cross-referencing incumbent to a populist form. Embedded in her work is the premise that all is interconnected and that claiming ownership of an “original” or isolated concept is both preposterous and redundant. ... more

Bandcamp Daily  your guide to the world of Bandcamp

Featuring interviews with the mighty Haitus Kaiyote and genre-busting L'Rain.